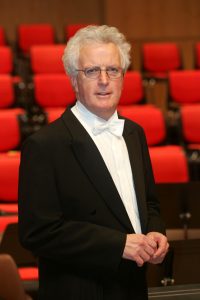 Limerick Choral Union’s own Malcolm Green has produced a beautiful performance of Sibelius -Romance for Piano; one of many performances he has graced us with over the past half year.

His playing has brought much comfort to our members throughout the past few months and has kept us connected. We may not have been able to sing and gather together but nonetheless we felt we were together while listening to his playing.Enjoy!

Limerick Choral Union is one of the longest-established choirs in the city of Limerick and celebrated its 50th anniversary in 2014 with a magnificent Gala Ball. Since its foundation in 1964, LCU has maintained its endeavours to encourage new talents into the choir and to continue to perform the best and most exciting choral works to its audience, under the musical direction of Malcolm Green.

LCU sees itself as an ambassador for Limerick, promoting its talents locally, nationally and internationally. The choir has toured and performed in France, Bulgaria, Poland, Slovenia, Italy and England. The choir has collaborated with many other choirs and over the years it has entered numerous competitions winning the Best Limerick Choir award in 1997.